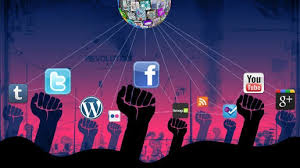 Digital activism, in itself, is a very controversial topic. There is a fine line between being a hero and a traitor, they could even be interchangeably used. It all depends on the person’s point of view; the citizens of the US portray Snowden as a hero for exposing the CIA’s surveillance, but in the eyes of the CIA and the government, Snowden is just another notorious traitor. But what is digital activism? Digital Activism or as some call it Data Activism is a form of activism with a ‘socio-technological dimension’ aimed at the collection and exploitation of massive data. (Milan, S. (2016)

Digital activist and social media influencer Wael Ghonim helped incite the revolution of January 2011 in Egypt. He did it by founding the Facebook page “we are all Khaled Saeed”, where the discussions of the setting of the protests took place. Khaled Saeed was an individual who was abused by the police force, by being dragged from his feet and brutally murdered by police officers. This encouraged Wael Ghonim to take a stand against the flawed system, which appealed to the majority of the population. The situation escalated immensely on the third day of protests, which was named “Friday of Anger”, as the police force started to fight off the protestors and put them in chains for asking for freedom and justice for Khaled Saeed. Without Wael Ghonim’s efforts in organizing the protests and spreading the message of freedom, the Egyptian people would have never overthrown the 32-year-old regime that has been abusing the country’s resources for decades.’