‘Failure in the process of design’

Earth Overshoot Day marks the date when humanity’s demand for ecological resources in a given year exceeds what Earth can regenerate in that year. The date is calculated and this year, the date was July 29th, 2021 in comparison with the year before the date was August 22nd, 2020. There are solutions to improve sustainability that can be explored in regard to #MoveTheDate. Planet, cities, energy, food and population are the five major areas. Some interesting statistics regarding Earth Overshoot day – since 1970 there has been a 121% increase in world population and there is a 58% decline in the average population of vertebrate species. 57% of humanity’s Ecological footprint is a carbon (Earth Overshoot Day, 2021). The fact that we keep taking and taking from our planet without thinking about the consequences is absurd and dangerous, since not only we are affected by this, but the rest of the inhabitants of the world as well.

Failure is very fundamental in life, just as in the academic community as we learn from our mistakes and improve on them. Failure, mistakes are commonly associated with the idea of change, e.g. in a chess game depending on what moves the opponent makes – the player counters them with their own moves, and if the opponent or the player makes a mistake, there has to be a change in strategy as to how to proceed. At the end of the game, the players usually go over their moves to find out which mistake led to losing the game and what could be improved in future. In our case the scenario we worked with –as hirees of the municipality of Maastricht we had to come up with a technology-based solution with the focus point on the #MoveTheDate. At the beginning of our work on the project, we were given five priority areas to work with, with the goal of choosing one of them for our project to work on. We would have to improve the chosen priority area with our solution. The five presented priority areas – planet, cities, energy, food and population (Earth Overshoot Day, 2021). And our group did come up with an initial technology-based solution for one of the priority areas, but along the way, we made a mistake and had to make a change. “Change demonstrates that design thinking can identify an aspect of human behaviour and then convert it into both a customer benefit and a business value” (Brown, 2008, p.3).

My group and I met up together and took a walk through the Faculty of Arts and Social Sciences while engaging in a discussion about the given assignment, after the walk we could conclude two things that came to our attention, regarding energy consumption in our faculty. First was that at the time it was very bright outside and the daylight was sufficient enough to light up the rooms next to windows in one of the faculty buildings, but the lights in the said faculty building were turned off in an insufficient manner. The second thing we could conclude was about the university bathrooms, they employed a system where water is not wasted because the water sink tap dispensed water in certain time intervals. After these conclusions, we chose energy as our priority area. The next part of the assignment was creating presentations, where we would answer questions about the chosen priority area, the problem and the solution we are offering. Another thing that was asked of us, which was the creation of ‘’personas’’, these are not real people, but fictional characters that are created with the purpose of representing actual people affected by the problem or that are a part of the problem (Pruitt, Grudin, 2003). Our solution was not yet certain, as in how to implement it with a technological, e.g. digital, aspect. But regarding personas, we came up with three categories that represented the typical energy, in this case, electricity wasters. We ranged these categories in the manner of Low, Medium and High wasters. Each of the wasters is people that live in Maastricht and consciously or unconsciously waste electricity in different situations, e.g. when they are in one room but the lights are turned on in the other rooms as well, or even when they leave the house but leave the lights turned on. After the presentation, we received feedback about our project, one of the main things pointed out was about our created ‘’personas’’. From our categories – Low wasters did not fit in, because they are not part of the problem, but the solution. So that would leave us with two categories, High and Medium wasters to whom the solution should be applied to. As a group, we discussed ways of integrating technological solutions for our priority area and decided that we have to change our priority area and try something different.

This time we started to “reverse engineer” our priority area, by starting with thinking about Maastricht. While talking about ideas, brainstorming – we started diving deeper into bicycles (Thayer, 2017). We got to the idea by thinking about the problems the city of Maastricht has. Just like anywhere else in the Netherlands, students and working people choose bicycles as their day to day transport. Many streets are crowded with parked bicycles, both with and without owners. After researching statistics about bicycles, one of my group mates stated that in the Netherlands there are 1.3 bicycles for each person and Netherlands has a growing population of 17 million people (Dutch cycling figures, 2018). This presented a problem and a chance for us to provide a solution. From this, you could state that in the Netherlands there are enough bicycles for each person, even people who do not ride bicycles and who are not able to. We researched rental companies that hand out bicycles with hourly, monthly rates and came to the conclusion that they are part of the problem. If you think of it, then the companies pushing for innovation in improved bicycles are a part of the problem too, producing more than are actually needed and not being responsible for what is left behind. The problem was clear, there are more than enough bicycles for everyone, but they are not being used and instead, new ones are produced. We decided on creating a platform, where it would be possible to acquire used, but functional bicycles for a fair price. And our name – “Chainless” Since in the scenario we had access to work with the municipality of Maastricht, that provided a unique opportunity. There are many bicycles that are left behind on the streets and in the end, they are impounded by the municipality.

(Screenshot  from the government platform of lost goods in the Netherlands, this in a sense fueled our drive – we confirmed that our idea might be viable in an actual, real-time environment, not just hypothetically)

At the time we checked the website of many bicycles are found in the Netherlands and during that week there were more than 4000 bicycles found (Dutch cycling figures, 2018). After that, they are stored in the municipality’s depot, where unless collected by the owner they will remain (Missing bikes, 2021). This provides us with a source of bicycles that will be put to good use. Another source would be donations by people of Maastricht, who in return would receive discounts, coupons from the municipality of Maastricht.

After settling on this idea and consulting with our tutor, the priority area was clear – cities. Now we could start working on our pitch, we divided questions, my questions for the pitch were –  Who is the solution for? and Who is going to benefit? 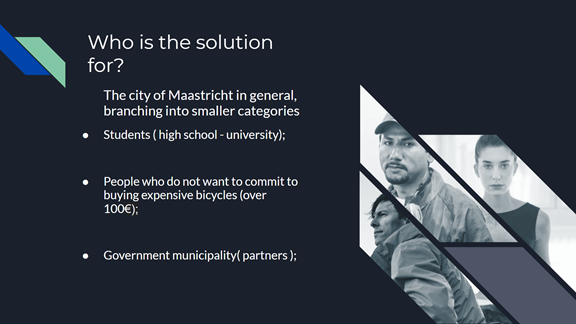 (Presentation slide I contributed in our group presentation, consisting of three categories that our solution had an impact on) 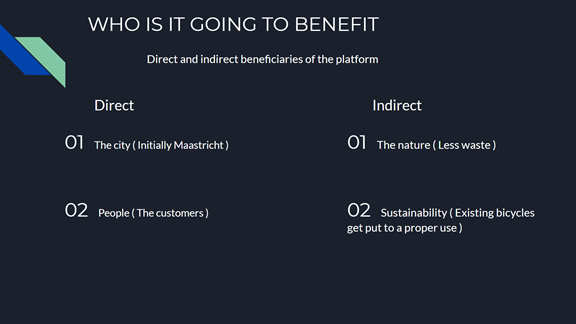 (Presentation slide I contributed in our group presentation, consisting of direct and indirect beneficiaries of our solution)

While creating our final pitch for the presentation, I came across a realization that in design-thinking collaboration is essential in decision making, in even the smallest details. It is essential because when limited to only one perspective on a subject you can not subtract the not so good ideas from the better ones, and ones ideas will always sound better to themselves because of personal bias. Though even in collaboration all the good ideas will not make it to the end. This brings out an interesting idea, regarding design thinking and collaborative work, sometimes the project you are working on might not entirely align with your thoughts and ideas, and even if it aligns, design thinking projects are not only about the outcomes but more about the process. According to Brown, taking different perspectives into account, collaboration fit under “A Design Thinker’s Personality Profile” (Brown, 2008, p.3). – traits useful when employing design thinking. And it is not important if the project has just started or is at the very end, design thinking goes along the whole way.

The process of thinking, collaborating, and creating is important. Skills, knowledge, and relationships built in the meantime are the true value of a design thinking project because even if the project does not become a reality, the real values will remain (Brown, 2008). Many of the innovative approaches that Brown mentions were employed and integrated into our work on the “Chainless”, e.g., taking “a human-centred approach” in our design thinking (Brown, 2008, p.8).

The initial idea of choosing energy as our priority area and focusing on the problem of the related waste was a failure in our process of design thinking. But we did not stop there, and we changed the idea. So, in a sense, the failure at the moment was necessary to improve and get more out of the project.

Failure and mistakes are important in all aspects of life because it is a great way to learn. Of course, during the brainstorming and discussing our latter idea of the “Chainless” platform, we made mistakes and ran into some problems, but I would not classify them as failures. The end product was not perfect, as nothing is, but it was better than working with the initial idea that would not have been feasible in a real-time scenario.

As written by Waloszek “In Design Thinking, designers do not make any early judgments about the quality of ideas. As a result, this minimizes the fear of failure and maximizes input and participation in the ideation and prototype phases”, which partly brings attention to the idea of failure or fear of failure, with which I strongly disagree, because “the greatest teacher, failure is” (Johnson, 2017,1:23:48) and if we focus on failure, or dwell in the fear of it, we can never grow past our mistakes or have any risk in life. 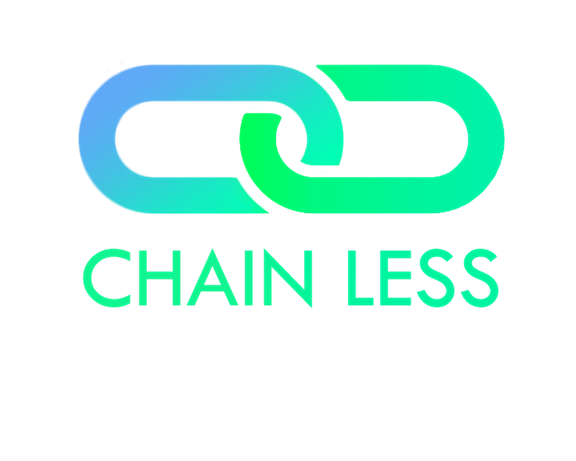 (Logo that was created by one of our group members, symbolizing the concept we used for the name of our solution – “CHAINLESS”)