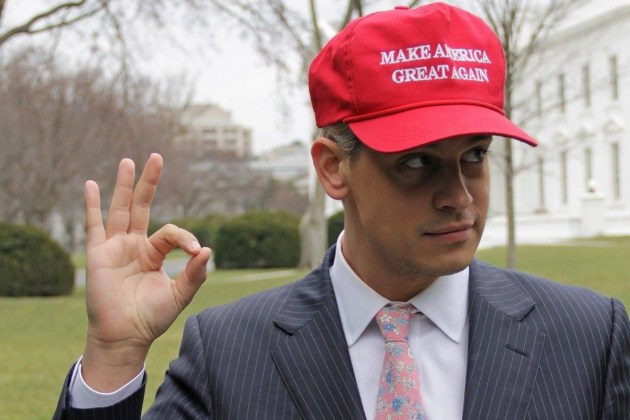 „You have the right to accept the blame for everything, especially if you’re white and male (bumps microphone) Not the first time I’ve had something like this poking in my face this morning” (2015, June 2).

Milo, a British polemicist and the former editor from Breitband news is known for his harsh judgment on feminism, Islam, and gender equality. The national attention that he received during the electoral success of the trump regime showed how his controversial and divisive opinion found its way through the social classes of the US and Great Britain. In his recent speech on social justice at the UC Irvine University, Milo certainly made use of gendered language, while referring to the right of having controversial opinions, since it is part of the very concept of freedom of speech. Before analyzing his speech, I want to clarify my stance on his views and opinion. I do not favor his hatred against social justice and movements such as Black Lives Matter, but I think it is important to acknowledge him as a poor example for contemporary politics and social equality within our societies.

The reason why I decided to analyze Milo’s use of gender language within his speech can be found by looking at his own perception of genders and their importance. As the aforementioned quote shows, Milo uses sexist language against himself in order to appropriate his further use of gender language towards other people. Since he is a white homosexual supremacist, engaged with an Afro American man, he claims himself the right to exercise offensive arguments against all genders and ethnicities with gendered and racist language. One example for his male homosexual gender language which shows how he appropriates his style of speech can be found in his speech on social justice:

“(drinks from penis shaped water bottle) my penis is leaking. No homo, yeah. No homo. Um, it’s about time we tried treating them with a bit more respect and dignity.” (2015, June 2).

This style of appropriation towards using inappropriate gendered language and sexist implications finds great support from his audiences who are often part of the working class and often in favor of the Trump regime. According to Trudgill, working-class speeches from men tend to contain more nonstandard linguistic forms than women. The acceptance and support of such language styles from the public are thus rooted within Milo’s appearance as homosexual man who support Trump racism. Furthermore, the general perception that better language behavior comes from women tells us, that Milo’s audience expects a rather offensive gendered language usage (2000, p. 73).

Another crucial factor that reasons Milo’s extreme gendered language is provocation. Certainly, he aims for attention with explicit language towards women and feminist movements. Although Milo’s gendered style of language aims to offend many people, it also made him famous (or rather infamous) and provided him with public attention and media platforms such as tv programs. As Oscar Wilde argued: “only thing worse than being talked about is not being talked about… Theres no such thing as bad publicitiy except your own obituary”. Contemporary speaking, it seems that gendered language becomes more important for famous people like Milo who aim for divisive reactions from the public. Furthermore, his hatred against feminist movements reflects on his preferred male gendered language, while being offensive towards women who are in favor of feminism. In one of his other speeches for Breitbart news, Milo announces himself as: “Welcome to the Dangerous Faggot tour. I am Milo, the most fabulous supervillain on the internet and of course in the minds of Americas liberal college professors.” Followed by gendered language which aims to offend females and their opinions:

“You can tell a woman’s fan letter to me because they are typically caveated with all the hurtful things I say that they don’t like… for example “Dear Milo you are completely wrong on trannies they are girls if they want to be….. But I must write to say thank you for standing up to feminist idiots”. (2016, October 7).

According to Mcdowell, gender linguistics within speeches are independent of the speaker’s gender. In almost every speech, gendered language has a purpose to either manipulate, promote or criticize certain topics that are influenced by the gender concepts of men and women. How audiences are influenced by this strategy is still not fully understood by the academic sphere, but it certainly plays a part on how to convince the people from certain opinions (2015, p. 277). In conclusion, Milo’s speeches present a new type of usage when it comes to gendered language. By doing so, his own sexuality and lifestyle plays an important role, allowing him to justify his offensive claims against other genders. Unlike the contemporary attempt to abolish gendered language and concepts within speeches, Milo goes against this trend with provocation to gain more public attention.