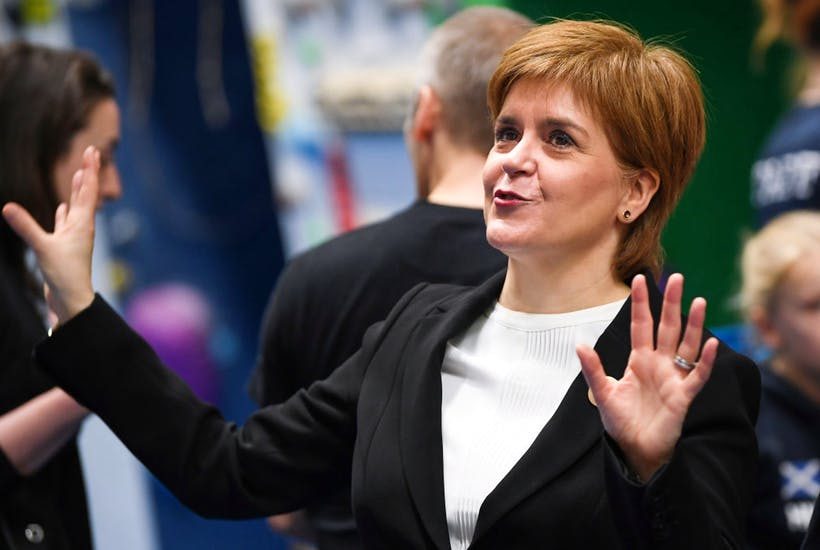 For this blog post, I will be analysing a speech given by Nicola Sturgeon, leader of the Scottish National Party (SNP), at the SNP Party Conference in 2018. Nicola is interesting because she operates a unique role within British politics. She is well established, having served as Scotland’s First Minister since 2014, and a key figure in British opposition politics with the SNP as the third largest party in the Britsh Parliament.

The speech analysed is therefore not an example of a politician on the campaign trail, who would perhaps be more inclined to use her femininity for political expediency. Instead, we will analyse how she uses gendered language from a position of power and stability in a much more subtle manner.

I have included a link to the speech below. As in most speeches, the vast majority of the content takes the form of political promises, anecdotes of past success and jabs at political opponents. However, Nicola deviates from this regularly to interject informal comments, often for comedic effect, which helps to keep her audience engaged and the speech flowing. It is within these moments that we find interesting examples of how gender influences her language choice.

What makes the speech interesting, is how Nicola Sturgeon uses these moments to bridge gender in a relatively subtle manner. She uses language and talking points which I believe help her avoid perceived female language attributes which may not be appropriate for someone of her position . Penelope Eckert references a few of these by suggesting that women typically: 1) avoid overt confrontation 2) suggest or ask rather than directing.

She also importantly makes it easy for men to relate to her, by using language, anecdotes and imagery which is typically more male orientated

One of her opening anecdotes, demonstrates this balancing act incredibly well. She discusses the success of the Scottish women’s football team, and how since she has become a patron, they’ve gone on to qualify for European and World championships.

This topic not only combines an element of national pride and women in the sports domain, where equality with men has often been a talking point. She also does it in a manner which makes her appealing by referencing the football chants;

I’m not about to break into a chorus of – “we’re on the march with Shelley’s army.”

By referencing this she plants the image of herself in the crowd at a football stadium, typically a male dominated area. After this, she returns to the formal political speech, without dwelling on the image or giving it a prominent place within the speech. It gives the impression that she feels very comfortable with being associated with this imagery, and isn’t ‘trying too hard’ to drive the point home.

The next point I would like to reference, is that there is a perception that women tend to favour ‘indirect’ language over confrontational language and this is supported by authors such as Eckert. Nicola leads us in to thinking this may also apply to her;

“It might not always be recognised by the doom-mongers in the opposition parties.”

The use of ‘might’ is an example of inoffensive political language designed to hedge political criticism of other parties so as to not be as confrontational. However, this impression is quickly subverted by the following statement:

“OK, I’ll rephrase that – it is never recognised by the miserable doom-mongers in the opposition parties.”

Not only does she reject the notion that she is vague by clarifying her statement to make it much more direct, but she also adds in negative connotations to further discredit her naysayers. This helps her come across as direct and confrontational, someone that gets things done, thereby dodging what is considered a female trait that may be undesirable in the political field. This is reinforced in further comments;

“And to the Prime Minister, my message is blunt..”

It doesn’t get more direct and confrontational than that. She’s giving the impression that she is standing there in an imaginary debate, having a dialogue with her political opposition, challenging them to respond.

She even goes on to put herself in the role as a protector of the Scottish people, introducing an element of physicality into her diction;

“If you go down that road, prepare for the political fight of your lives. We will never allow you to put Scotland’s NHS in danger.”

Another way in which Nicola subverts traditional language expectations of women is in the formality of language. Traditionally women are expected to use ‘proper’ language and there is a lower social threshold for informal or even bad language. Nicola bridges this expectation by first presenting the information in the expected formal manner, and then informally in a punchy and effective manner;

“By contrast, the Westminster Government stumbles from disaster to disaster. It is a shambles.”

The short, punchy ending to her phrase really drives the point home, making it appear more emotional. This is in comparison to typical political language which might perhaps describe it instead as being ‘ineffective’ or ‘misguided’. It also reinforces the earlier point that she is not afraid of confrontation by calling them out directly.

She even ventures into bad language, although it is very tempered;

They’ve even appointed a Minister for Food Supplies, for goodness sake.

This is only bordering on bad language, especially for Scotland, however it is representative of Nicola’s subtle style to separate herself from typical female language tropes, in this instance of being ‘prim and proper’.

Overall her performance is by no means an obvious example of strong, gendered language. However I think it serves as an important example of the language subtleties that an experienced political leader must employ to navigate the realities of gender issues in today’s society.