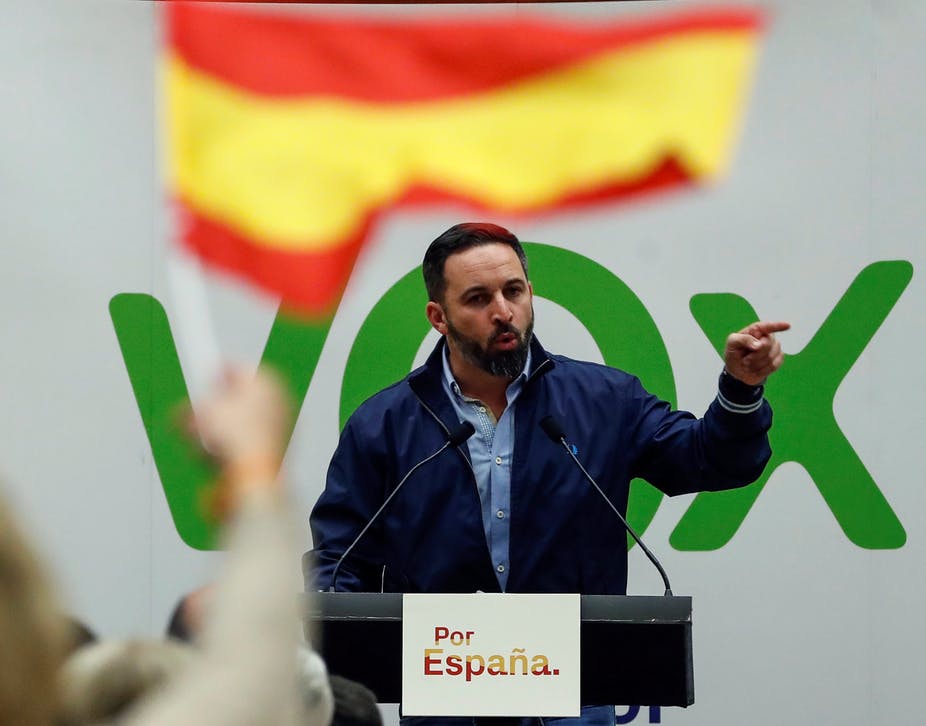 Ever since Francisco Franco died in 1975, Spain has never seen a right-wing party gain the electoral success Vox did in 2018. They obtained a total of 11% of votes cast, gaining 12 seats in Andalucia’s regional elections. Thus, bringing an end to Spain’s exceptionalism status after more than four decades. This was accelerated in 2019 when Vox broke into the congress of deputies securing 10.26% of the general election vote.

One can only wonder how Spain’s right-wing electorate is so strong considering its not so distant past under Franco’s dictatorship. Has Spain forgotten what it was like under his control, or has the rise of Vox got nothing to do with Franco at all?. This sparks the question: what truly does explain the rise of Vox?. Is it the rise of Francoist sympathisers into the Spanish electorate?. Unlikely, it can be better explained through other reasons that currently exist within Spain’s political socio climate. These topics consist of splintering from PP, the immigration crisis and the Catalunya crisis.

Splintering from the Partido Popular

The Partido Popular (PP) had largely been one of the most successful political parties since the death of Franco. They provided a voice for right-wing voices, governing the past 12 of 20 years. However, internal dilemmas that existed within the party allowed Vox to splinter from the party and find traction within the Spanish electorate. Vox had appeared as an alternative for unconvinced PP voters who felt the party should have been doing more regarding Catalunya’s independence rise, whilst alienating their voters through corruption scandals .

One can make the case that if PP had not been so ambiguous with its Catalunya messaging, I would not be writing this text at all. Yes, PP wanted the best of both worlds, they wanted to maintain their anti-independence electorate whilst also attracting voters that were on the fence between voting for them and Ciudadanos.

Why is Catalunya so important for Vox?

The Catalunya crisis is arguably the primary factor for the rise of Vox. The rising demand for increased autonomy has equally triggered strong demands for recentralisation. Thus, Vox has been able to capitalise on this sentiment garnering national support. Vox had made the ‘Catalan issues’ its focal point within its political agenda which was especially prevalent for its 2019 election success.

The majority of the academic community conferred that the crisis was the primary component that triggered the immense amount of support for Vox. I too agree with this claim. As long as regional autonomy maintains to be a salient issue in Spanish politics Vox will likely remain as a political wildcard.

How can immigration explain Vox’s ascent?

The success of Vox in their Andalusian regional election can partly be explained by the rise in immigration. It is not difficult to see if they have taken a headline stance on this issue, consistently calling for the deportation of migrants.

Nevertheless, Vox has struggled to gain traction on this issue on a statewide level. Where there are strong regional identities, support for strong stances on immigration greatly diminished. Thus, making it difficult to frame immigration as a salient issue. This partly explains why Vox did so well in Andalucia. In an El País survey, 40% of Vox voters mentioned immigration as a primary reason for voting Vox in the regional election.

Can Vox be considered fascist?

In recent years it has almost become a trend to call any right wing party fascist. Using terms as such can become divisive and simply not representative of the party in question. Therefore, it is necessary to understand whether or not Vox is actually fascist. Previous blog posts have briefly touched upon this idea in question. The blog makes the case that fascism could merely be a form of new populism. Vox would certainly agree to this conclusion, dismissing any claims of fascist connections. However, the academic community would disagree.

The academic community defines Vox as an ‘archetypal populist radical right party’ if we are to apply Cas Mudde’s criteria. He includes characteristics such as a combination of nativism and authoritarianism. Such conclusions about right wing parties in modern Europe can also be traced to the north of the continent. An example of this can be found in Sweden’s Sverigedemokraterna (the Sweden Democrats). There has also been consensus amongst the Swedish scientist communities that they too can be considered fascist, or at least far right with both parties invoking a sense of nativism that resembles a fascist ideology.

I also agree with the academic consensus, Vox has been able to re-awaken a nationalist sentiment that has long been dormant since the reign of Franco. Now, whether Vox can be clarified as fascist warrants more research, a matter of time and the chance of governance. Nevertheless, the continuous rise of Vox as discussed earlier depends on how strong demands for regional autonomy will proceed. Vox has been one of the latest editions to far-right parties in Europe. However, whether they wish to maintain a political powerhouse compared to the likes of Marine Le Pen’s National Rally will depend on how well they can attract voters on issues that don’t revolve around Catalunya.

The populist personality: What character traits describe the far-right voter?

14 thoughts on “The end of Spanish ‘exceptionalism’: The rise of Vox in Spain.”